Your browser does not support JavaScript. Are you using Netscape or something?! How Solar Works | KW Solar Information

Amazing solar fact: According to most experts, enough energy hits the earth in a single hour to meet all of humanity’s energy demands for an entire year. Read on for more such tidbits of wisdom, and a quick explanation of how solar works!

How to get electricity from sunlight

The photovoltaic process (“photovoltaic” is just a Greek way of saying “light energy”) is really a pretty simple way of converting one kind of energy to another. In this case, a chemical process uses photons from the sun to make electrons move where we want them to. It’s a miraculous, continuous cycle, kind of like the Lazy River at Schlitterbahn, except it’s much smaller, much faster, and it’s pushed along by the sun’s photons rather than big pumps. 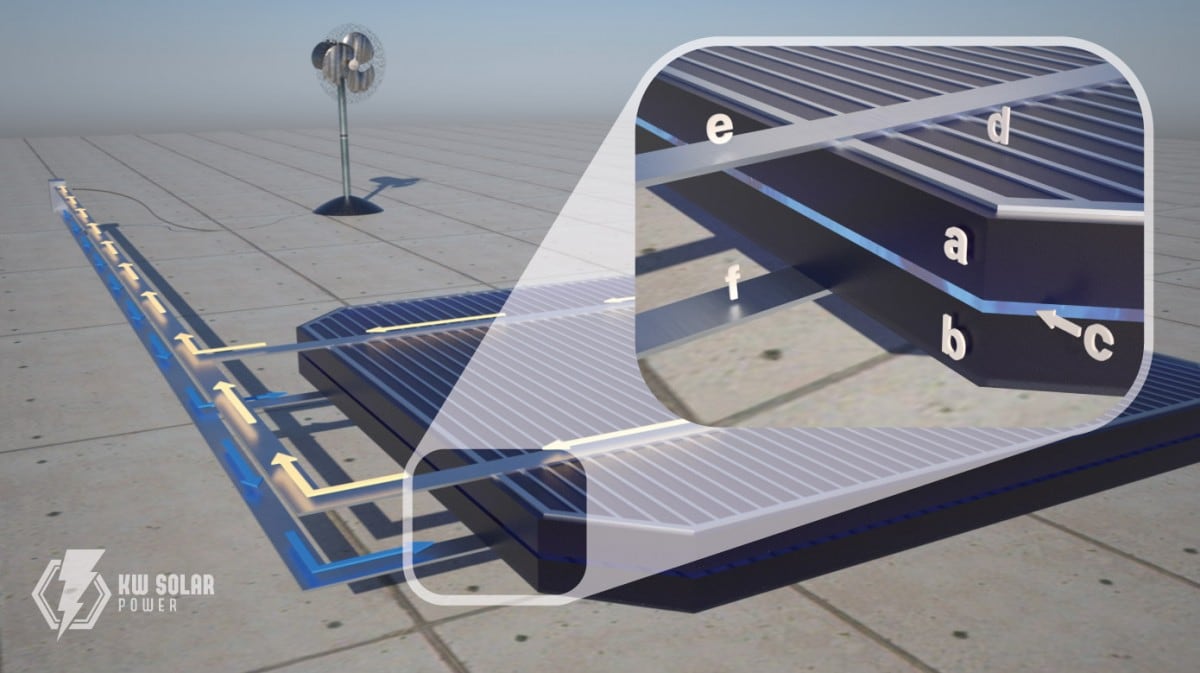 Chemical properties in the top layer (a) result in a bunch of electrons wanting to move into the bottom layer (b). Now, they don’t just up and leave their molecule on their own, but sunlight energy knocks them loose, and they begin their journey. They can’t go directly into the bottom layer because we block them with a sort of one-way filter (c). They have to go the long way round, through the conducting grid (d), which is really just a bunch of little wires, into bigger wires (e), and thence to the “load”, which is a nerdy way of saying lightbulbs, fans, bread makers, etc.

Question: Do the electrons ever get tired?
Answer: No.

The top panel (a) is made of silicon doped with phosphorous, which results in a pretty stable molecule, except that it has an extra electron in its outer ring. This means it’s “negatively charged” (you may remember some of this stuff from chemistry class).

The bottom panel (b) is also made of silicon, but it’s doped with boron instead of phosphorous. This molecule is missing an electron in its outer ring, which means it’s “positively charged”.

For some cool reason, electrons like to have just the right amount of companions in their rings, so the extras up top will want to fill the holes on the bottom. The tension results in an electromagnetic field, which can be thought kind of like masses of immigrants wanting to move from one country to another. But they can’t just waltz on down, because there’s also a chemical catalyst (c) combined with an electrolyte (yep, like Gatorade, sort of) whose job is to push electrons back from (b) to (a). This is like an atomic border patrol.

Also, they won’t begin the trek without some sort of impetus. That’s where the sun comes in. It bombards the panels with photons–tiny packets of light–each of which has just enough energy to knock an electron out of its silicon-phosphorous molecule. Once in transit, the electron sees the holes in the boron molecules down below, and wants nothing more than to go settle in.

Fortunately for electrons, they move thousands of miles per second, and are perfectly happy racing through the conductors (d, e) and out into your house, electrifying whatever it is you have plugged in. After they’ve done their work, they come back in by way of the return conductor (f), where they take their place in the holes created by the boron molecules.

Except for that catalytic border patrol (c), that kicks them upward through the electromagnetic field, where they get hit with another photon and make the trip all over again. And thus we have power (as long as there’s sunlight).

Is it really that simple?

Almost. We’re dealing with subatomic phenomena here, so you can’t just make this stuff in a mixing bowl. Also, your house probably runs on alternating current (AC) while solar panels, like batteries, product direct current (DC). For this, you need an inverter. The voltage needs to be stabilized, and it needs to tie in to the grid or to battery backup. But photovoltaic cells are a long-established, time tested method of generating electricity, and they’re not remotely likely to malfunction, unless something blocks the sunlight.

How much solar energy would YOUR roof generate?