Your browser does not support JavaScript. Are you using Netscape or something?! Art Attack project gets green tag on first attempt! | KW Solar | Houston Solar Installers, Serving Texas & Gulf Coast

Okay, so we did this 11 kW system on Art Attack’s warehouse/world headquarters. It’s a big steel building in The Heights (Houston’s hippest neighborhood), designed by architect Palmer Schooley, and it has a glorious, unobstructed, south-facing roof over seventy feet wide (Jimmy would know the exact dimensions, but Jimmy’s probably asleep as I write this). Forty 275W panels perch confidently along the expanse, generating over 15,000 kWh per year (which, as everyone knows, is enough energy to lift an elephant over 1,200 miles into the air). Basically, it’s the perfect building for solar, and I think Palmer probably had that in mind when he designed it.

Anyway, the install went really smoothly. We were on the roof for less than two days. We needed a couple of extension ladders to get up because the roof was about twenty feet high. It takes some guts and athleticism to lug forty panels–plus all the tools and hardware–up a bouncy extension ladder, but it ain’t a thing for our crew. They’re professionals. The building has an industrial look, so the conduit just makes it look cooler.

Anyway, we got a green tag on our first attempt. It’s not like instant passes are out of the ordinary, but it’s still extremely satisfying after all these years. So satisfying, in fact, that I decided to sit down and write about it. 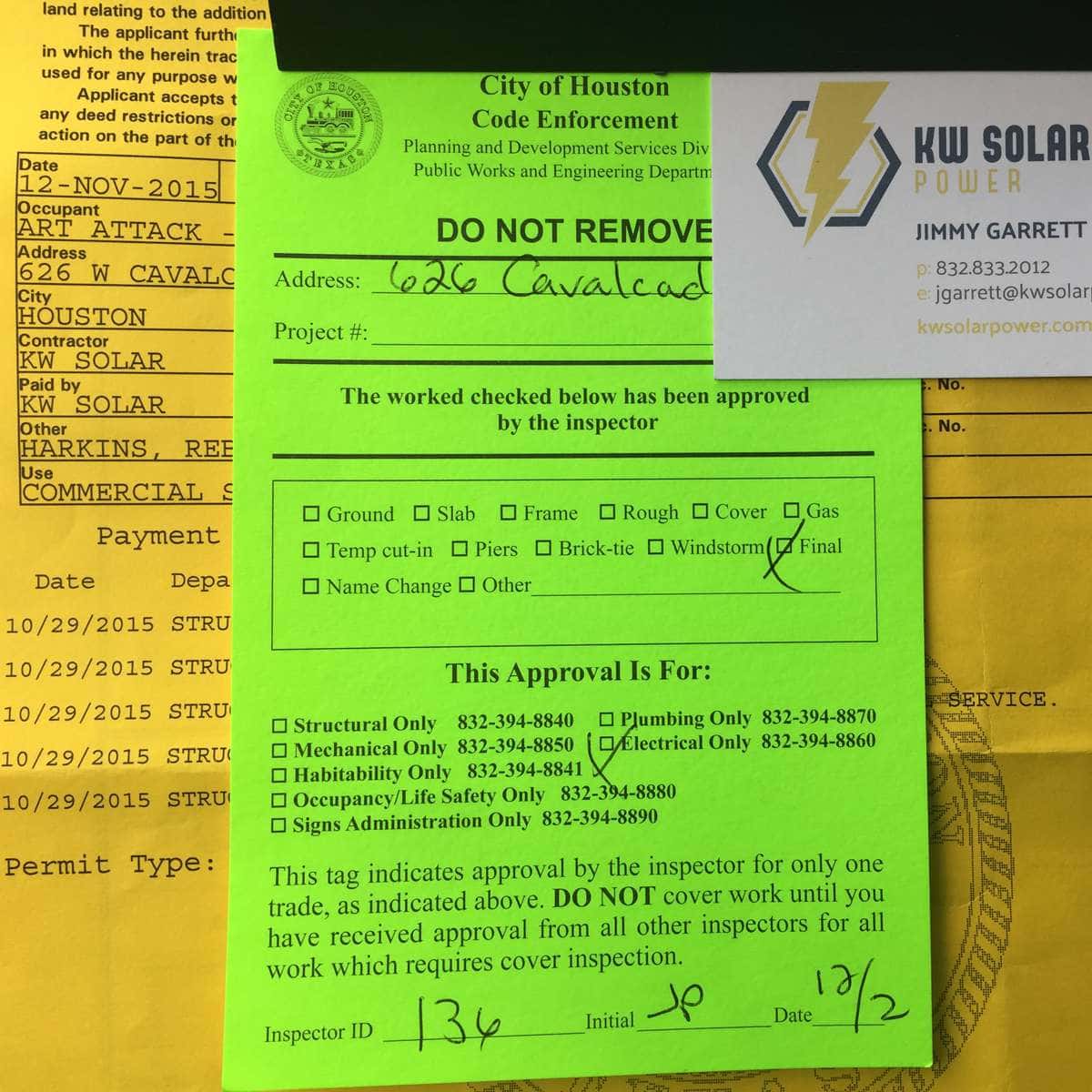 If you’re like most people, you’re probably wondering what on earth Art Attack is. No doubt you have a mildly apprehensive, yet burning curiosity to know what’s in that awesome looking building.

Well, imagine going to a swanky gala at the Hilton Americas in downtown Houston and seeing enormous Egyptian columns, a life-like sarcophagus, and a faux stone relief depicting Anubis, the jackal-headed god of the afterlife, where before there were no such things. “How did those get there?” you’re probably wondering. Well, Art Attack put them there. That warehouse on which we installed the beautiful, 11 kW solar array, contains tens of thousands of similar trappings for lending your upscale event that extra measure of panache; everything you can imagine, from giant clowns to covered wagons to a 12′ tall guitar.

I can’t believe we don’t have any picture of the inside! Stay tuned…

How much solar energy would YOUR roof generate?

KW Solar designs and installs solar systems in Houston and beyond. Here's proof!